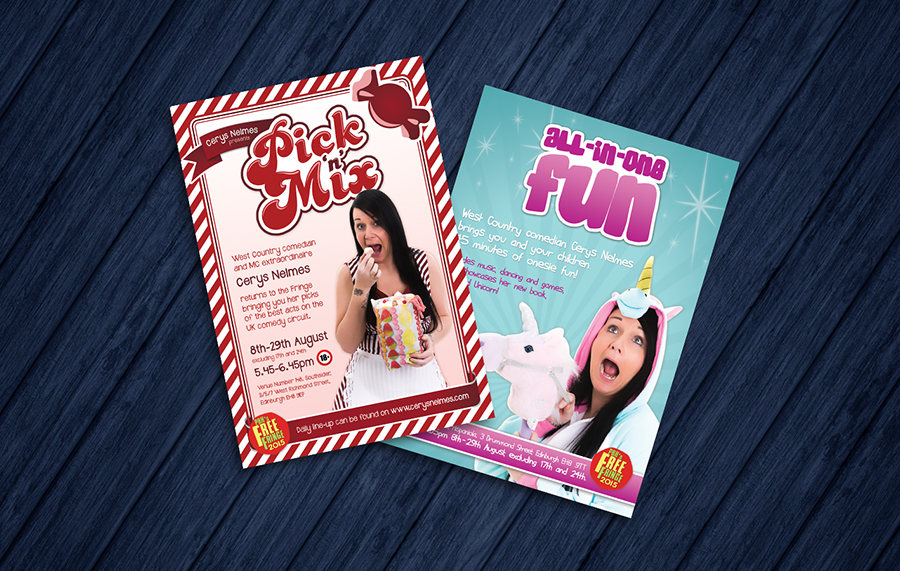 In 2015, local comedian Cerys Nelmes approached us looking to design a double sided promotional flyer for her comedy shows, ‘Pick ‘n’ Mix’ and ‘All-in-one Fun’ at the world’s largest arts festival, the Edinburgh Fringe Festival. Cerys again contacted us in 2016, for a flyer promoting her show, ‘My Fakebook Life’ at that years Fringe Festival.

To see Cerys live, or as she puts it ‘where you can watch me do funnies’, visit cerysnelmes.com.

“This is the second time that I’ve had Mark design my Edinburgh Festival Fringe comedy flyers. I was so impressed with his design for my two-handed show last year that I had no hesitation in contacting him to design for my two Edinburgh shows this year. I gave him a very vague brief and was very impressed with the final result! Very quick response and turnaround and I wouldn’t hesitate to recommend him to anyone! Hopefully he’ll still be designing for me when I’m ‘Live at the Apollo’!”